So I was thinking about some of the gear I used, and subsequently replaced, after the Saddle Sore 1000 and touring adventure with the guys and I thought I might do a quick review and comparison of the glove situation along the way. Maybe it will help someone…. 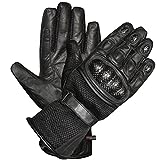 I bought these (XL) as a cheap entry item and they worked really well. At about $24 they were not the cheapest pair available but they were cost conscience. I liked that they had the carbon fiber knuckles which not only look cool but might actually provide the additional safety that are intending. They were used as daily riding gloves in San Diego for nearly a year. No issues. They breathe very nice (mostly mesh).

When I tested them against the elements rarely seen in San Diego they did not do as well. As I rode through the rain (for two days straight mind you) they did bleed onto my hands leaving black-ish stains on my hands. I would dry them on the BMW R1150GS valve covers when stopping for gas… which worked really well! Till they started to shrink and melt a bit. The thumb started to get a little small.

Once back into civilization I promptly ordered another pair to be delivered to my sister’s house where I could get them on my way back through town. It worked! Amazon had new gloves waiting for me when I arrived. This time an extra size larger (XXL). The XXL did not seem much bigger than the XL.  That was a disappointment as I was looking forward to a little more room in the glove. Another disappointment came a day later when they split up the side as I put them on… a faulty stitch job allowed them to rip like they were perforated. Struggling to use them the last bit of the ride… I went without gloves for part of the ride and was rewarded with a nice sunburn on the back of my hands.

Once settled at home I worked the refund process and it was a cinch. The faulty stitch may have been an oddball occurrence but between Amazon and the vendor it was easy. 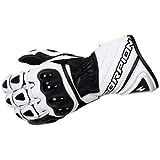 In the market for new gloves I set out to do some research. My first (and second) glove choices did the job but I wanted a bit more now that I knew more. Also, not having sticker shock from buying all my gear at the same time… I could afford to drop a little more on gloves this time.  Whereas the mesh gloves were fantastic for dry riding in San Diego… I was expecting I might put myself into another situation with storms (if not tornadoes again) and have to spend a prolonged period of time riding in ‘the wet stuff’.

Watching reviews at Revzilla, Motorcycle Super Store, and of course independent verification by ‘the Youtube‘. I decided to drop nearly $80 ($66 now!) on the Scorpion Guardian Gloves. I like the gauntlet style glove because of the way they cover the cuff of my jacket rather than letting air fill the wrists of the jacket. So that was a feature I was keen to keep with the new glove. The nylon capped knuckles made me feel safer about any accidental punches to the road.

These gloves are nice and broken in today…having been on a couple of long trips and doing daily commuting duty. Here is what I like: easy on and off, fit like a glove (*insert rim-shot*), breathe really well for being mostly closed off leather, and so far have been very durable. Two times they have been down; one on dirt and one on the road. The gloves show no damage and neither do my hands.

For what it is worth – My two cents and experience with two different gloves.