A friend (Anne) asked me to put a story from a couple of years ago to paper (or pixel as the case may be) and I have agreed. I offer this, a story of one of the most interesting men I have met …  so that history may not be lost.

We were on our way to the family cabin. Family cabins are a big deal in most families. This was an honor that I might have been the first to attain in that family.  Similar to my own family home in Alaska… one is not allowed to just bring people. The honor is still yet to be bestowed on any of my relations over the years so I know how big a deal ‘being invited’ to family vacation home can be; I am still thankful that I was allowed this trip.

A 10 hour road trip commencing after work, driving till exhaustion, too much time on flat, straight freeways through central California agricultural land, before an amazing climb into the mountains on a goat road, with a short stop in Modesto to see her aged grandparents. “I love old people…” I said genuinely, as we discussed the quick layover; intended to be a courtesy call on the couple in their 90’s. We both understood the fact that at this age any visit could be the last time with the elders.  Valuable road-time  invested in a quick side trip for this important appointment.

Barreling down the dry dusty roads of Modesto; past fruit vendors and acres upon acres of almond trees. Turning down one side-road and then another.  A ranch style home sat at the corner of a very large property. (Much larger than I would have imagined. I was told later that it was more than a 1000 of acres. Much of the property being worked by Blue Diamond growing almonds and Mondovi growing wine grapes) We pulled into the driveway then rolled our hot bodies out of the seats that had conformed and suctioned sweatily to our bodies. Stretching… standing overly straight,  exaggerated movements side-to-side, felt good to stretch after hours on the road.  Tight legs and sweaty backsides getting some well needed breezes; we took our time meandering into the house through the open garage.

We entered through the kitchen as we had been expected. Grandma was in declining health and quickly retired to her room to rest with the help of the live in nursing assistant. Grandpa (Mr. Merritt (Mike) Wanty) moved slow around the house but was sharp as a tack.  He welcomed us in the kitchen then we moved to the living room to sit for a visit with Grandpa. The room was intentionally dark to keep the room cooler.  “Grandpa, Bobby was in the Navy too.” Anne said intentionally much too loudly. “Oh!?” Grandpa responded… what came next was more than two hours of history and stories that one cannot illicit from most veterans of his era unless they are part of the sailor’s brotherhood.

“What ship were you on?” he asked, with a wry smile… this was bait and we both knew it, he was leading me to the next bit. “USS Blue Ridge, Yokosuka (pronounced yah-koh-ska) Japan.” I responded.  After a short delay, you could tell he was processing what he had heard… to be sure it was correct he echoed, “Yo-Koh-Sue-Kah?! (Pronouncing like only a gaijin (foreigner) can but in that endearing way that grandparents alone can get away with.)  ... I’ve been there!”  He proceeded to tell me a sea story about the attack on Yokosuka. This is not the same story you can read on Wikipedia today which only covers the air strikes and the status of a couple of dilapidated ships that remained in harbor afterwards. His story rather comes after the air raids, but before the formal turn over, and is about the first US troops to go ashore after the base had been bombed.

He had been stationed onboard a destroyer, USS Lardner DD-487, during ‘The War’, in the South Pacific. He described the conditions on ship, the officers onboard and in-charge, and the battles as they moved north towards mainland Japan in detail only a young man could remember.  As he went I interjected the way the Navy does it today which he acknowledged, only barely, but seemed to appreciate that I was tracking so he continued. His memory was incredible. He recalled all the officers names like he was reading a list. (I can barely remember any of my officers names!)

As it turns out he led the team ashore in Yokosuka; possibly the first US Troops to go ashore. A six man team who were dropped ashore with rifles and told to signal if they had trouble. He told me this caused some concern because any signal they  might give would be met with a barrage of shell fire from the fleet which is not exactly surgical. Indiscriminate maybe, general area destruction at best as they would be standing right where the shells would be aimed!  He and his team crept from building to building and did not find any resistance. The bombing from the Doolittle raid and following aircraft carrier launched attacks (around July 1945) had run off all the Japanese troops stationed in Yokosuka. They inspected the caves and the headquarters buildings…. everything not destroyed by bombing was left in tact almost like they had run away leaving anything of value right where it belonged.  Mike and the US forces occupied the base until an official transition could happen. On August 30th, 1945 the base was officially transferred by Vice Admiral Totsuka to Rear Admiral Carney. On October 15th, 1945 Yokosuka Naval Arsenal was officially abolished.

The USS Lardner went on to be sold to service in the Turkish Navy, Mr. Wanty went on to survey oil for what would later become ARAMCO in Saudi Arabia… and two hours into story-time I could tell by the expression on Anne’s face that we should go on our journey as well.  Before we left Mike leapt to his feet, with all the grace a gentleman in his 90’s can muster, and walked across the room to the hutch where he showed us artifacts from the Yokosuka Japanese Headquarters building.

Sea stories abound among sailors but this was much more than a sea story. Mike Wanty’s descriptions and recount of this particular mission had detail and emotion that had not been expressed in nearly 70 years.  As he passed through life he held this story waiting for the guy who was stationed in the Navy at Yokosuka and had just returned from Saudi Arabia; it was time.

Was it all true? Like any good sea story there are no salads, no peace, and no PG ratings.

Mr. Merritt (Mike) Wanty has gone on to his next deployment with many more of his stories untold. I am honored to have had my couple hours with him to hear this one and share it with you dear reader. 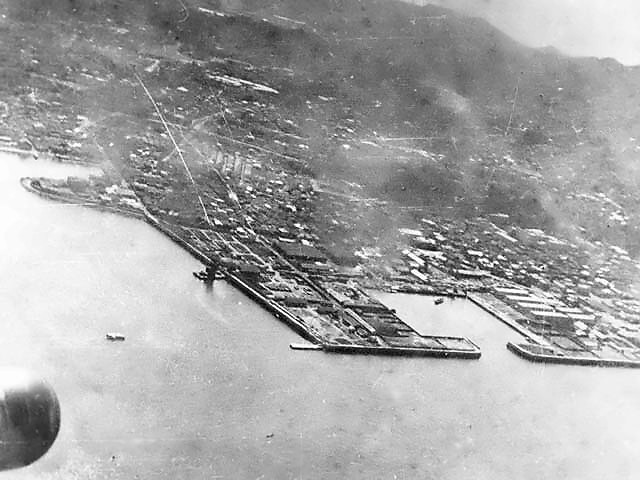