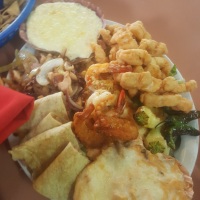 Why not end the week the same way we started it? Leave straight from work to do some free dive spearfishing.

After some minor gear malfunctions on Monday I was keen get back in the water Friday night. Gear all sorted…. well… not quite. My booties were still on the patio. DAMN! My fins don’t fit without them.  I fiddle with the fins a while trying to adjust them. Nope.  As I sat in the surf lamenting my fin situation it finally dawned on me… I have Mr. T’s fins in the truck!  They are smaller so will not require booties! It does mean I’ll have to work harder though.

Fins solved. I crawled through the surf grass, dove under a couple breaking waves, and hung at the edge of the reef watching my prey.

In contrast to Monday the water quality was terrible but the movement of surf perch along the reef is unmistakable even through the bits of grass and other particulate that obfuscate the bottom.  Being able to still see the moving fish I have a target to dive on.

About an hour in the water, five shots on fish,  two on the game hook. I recently started cleaning my fish at the beach after watching ‘my spearfishing GF’ in Florida. (It was once identified to me that I have many girlfriends… though not really girlfriends…I somehow become friends or follow good looking women that are participating in activities I like. Hmmm…)  Makes clean up at home non-existent.

I like this with Chinese style or Spanish rice (picture was some venison dirty rice I made earlier in the week).

Now to get the small holes fixed in the butt of my wet suit… or butt-holes if you will. Yes, I am hell on gear. While I was messing with the fins I got pushed onto some rocks and tore tiny little holes into the butt of my suit.  Just found those… Fantastic!  Next post might be about fixing wet suits. Let’s call it ‘How to get rid of butt-holes’. HA!